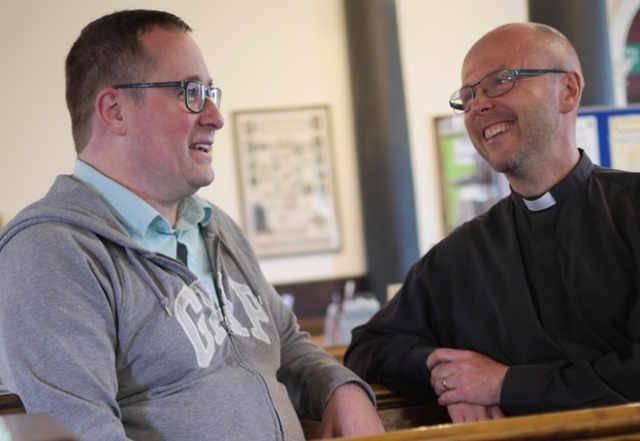 BBC Radio Cumbria presenter Richard Corrie will never forget the moment he discovered he had been accepted for ordination – he nearly dropped his mobile ’phone in a deep fat fryer!

The 45-year-old was working a Friday afternoon shift at the fish and chip shop he owns in Wigton when the call came through, confirming his success.

Richard laughed: “In all the excitement the ‘phone nearly ended up in the chip fryer but to be honest I wouldn’t have cared. I knew so many people had been praying for me, both before and after the selection process but I still couldn’t call it. When I was told I’d got through I was totally wowed and then I got on the ‘phone to tell my mam!”

The well-known broadcaster – who presents the station’s early morning slots and the Sunday morning breakfast programme – is one of five people from across the Diocese of Carlisle selected for ordination this year.

Richard was born and brought up in Carlisle, studying media at the city’s Institute of Art before first presenting on CFM. He joined BBC Radio Cumbria in 2008 having already freelanced there.

As a self-supporting minister he will continue to work for the BBC, both during his training and following ordination as an Assistant Minister in three years’ time.

“As a small boy I asked my mum to take me to Sunday School at St Barnabas in Carlisle,” Richard explained. “I later became a server and assistant organist before moving to Currock Methodist because I wanted to be an organist.

“After that I was at St Herbert’s Currock for 30 years before moving to St Michael’s and St Mark’s Stanwix to experience ministry in a new setting as part of the discernment process.”

His path towards ordination has not been easy. In 1998 Richard was unsuccessful at his first selection conference. A few years later that happened again. Despite this he felt called to train as an Anglican Reader and was licensed in 2004.

Richard said: “In 2016 I went to see Bishop James to say I still felt I was being called to ordination. Since then we’ve taken it slowly, we’ve discerned things properly and I’m now going forward as a self-supporting Assistant Minister which means I can continue to broadcast but as an ordained person.

“It’s a totally different approach but the right one for me; previously it was about going away to train at college for three years and then coming back to help run a parish. But now I’ll train here in the county. I’m passionate that other Cumbrians who feel called to ordination are able to move forward in this way.

“For me ministry is all about communication. That’s what I do through my job in the media and through my job on a Sunday morning. For some people who can’t get to church, I may already feel like their ‘radio vicar’, so I truly believe my ministry and my broadcasting will go hand in hand.”

The Rev Canon Peter Clement, Diocesan Director of Ordinands, has supported Richard throughout that discernment process.

Peter said: “I am absolutely thrilled that Richard has successfully completed the selection process. At times this has been a challenging journey for him. He has experienced knock-backs but his faith has always remained steadfast and I know he understands that it has been God’s timing to get him to where he is now.

“I’m thoroughly looking forward to supporting Richard and all of our other wonderful ordinands as they seek to live out God’s purpose for their lives through new ministry.”

Richard says that support has been echoed by all his colleagues at BBC Radio Cumbria.

Graham Moss, Assistant Editor at the station, said: “Richard and I have worked together for over twenty years and for as long as I’ve known him he’s been talking about pursuing this calling. I’ve shared the disappointments when things haven’t progressed, so I’m delighted that he’s finally been selected.

“We both know that the hard work starts here and that Richard has to combine this with his day job of producing and presenting radio programmes, but everyone at BBC Radio Cumbria is really pleased for him.”