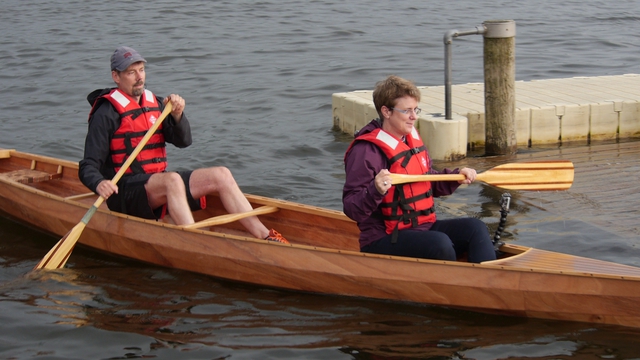 A dramatic thunder and lightning storm heralded the launch of a Northern Centre for Pioneer Mission in Cumbria.

The formal collaboration between the Diocese of Carlisle – the Church of England in Cumbria - and Church Mission Society (CMS) was due to be marked by an evening’s paddle out to St Herbert’s Island on Derwentwater yesterday.

The ‘flotilla’ of canoes was due to be led by a kayak paddled by the Bishop of Penrith, The Rt Rev Dr Emma Ineson and Jonny Baker, Director of Mission Education at CMS.

And while Bishop Emma and Jonny were able to take to the water briefly, the planned paddle had to be called off as the summertime storm hit on what was officially Cumbria’s hottest day since Met Office records began.

Bishop Emma told those gathered: “We had hoped to go out to the island but sometimes the Holy Spirit has other ideas! I’m really excited by this new venture, the Northern Centre for Pioneer Mission and it’s wonderful that the Diocese and CMS have been able to come together to make this happen.

“Nationally the Church of England is looking to identify and train up to 6,000 pioneer ministers, so our prayer is that the centre provides a rich harvest of people from across northern England and southern Scotland who want to explore what this mission could mean for them.”

From 2020 the Northern Centre will offer the CMS Certificate in Pioneer Mission and is for people looking to develop both their understanding and practice of pioneering mission. Study will be based around six modules: pioneering mission, reflective practice in context, church in mission, reading the Bible, missional leadership and mission entrepreneurship.

Pioneers connect with people outside the Church, creating new ways of being Church together in their community. They are innovative leaders with a gift for seeing what God is doing and responding creatively to it.

This new collaboration will also see the joint roll-out of a third conference on Fresh Expressions (new forms of church) to be held in the county in November as well as the potential development of a redundant church as a new pioneering arts hub.

Such developments echo new research which shows an estimated 50,000 people now worship in Fresh Expressions of church, accounting for 15% of congregations in the Church of England. To capitalize on the success of this movement the Church of England plans to identify and train up to 6,000 new ‘pioneer ministers’ in the next decade.

Jonny Baker, who managed to paddle to the island later in the evening after the storm had passed, told those gathered: “I have been reading Mark 4 all this week which is where Jesus says ‘Let’s go to the other side of the lake’. There’s a storm on their way there, so I was genuinely excited when I saw lightning and heard thunder. I thought ‘This is it!’

“My experience of pioneering is that to get to where you need to be you often go through storms on the way. So this feels real for the start of our journey to new things but I’m sure that it will be smooth sailing between CMS and the Diocese.”

The Northern Centre for Pioneer Mission is part of a growing network of training hubs for lay pioneers that CMS is developing in partnership with Dioceses around the UK. It represents the latest step in nine years of sustained success and continued growth of CMS’s Pioneer Mission Leadership Training programme that will serve the Church for the next generation.

A national launch for the Northern Centre will take place at this year’s Greenbelt Festival (a festival of arts, faith and justice) which is held in Northamptonshire over the August Bank Holiday weekend.

Church Mission Society is a community of people with a passion for mission. Formed in 1799 at the zenith of the anti-slavery movement, CMS is one of the world’s oldest mission agencies.

CMS’s vision is to see people set free to play their part in the mission of God, bringing challenge, change, hope and freedom to the world, so that people and places are renewed with the love of Christ, pioneering leaders can forge new paths of transformation, people on the margins flourish and the healing of creation begins. CMS currently has over 350 people currently serving in mission programmes, nationally and internationally, responding to God’s call in Europe, Africa, Asia, the Middle East and Latin America.

Information about Cumbria’s ecumenical God for All vision and strategy can be found at www.godforall.org.uk.