From Armed Robber To Vicar 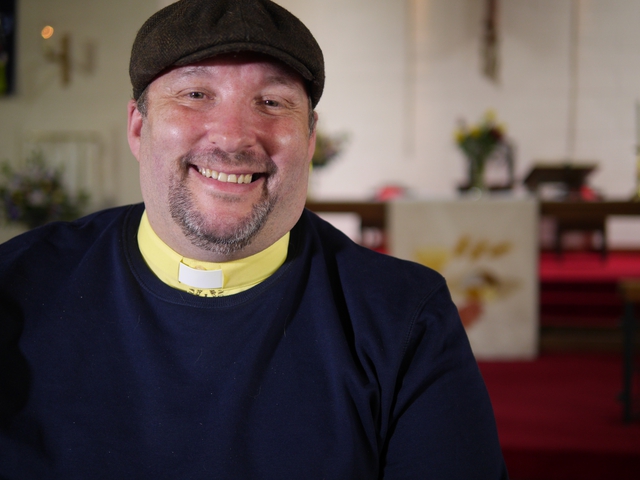 The Rev Matt Martinson stares into space as he recalls the moment he walked into a York post office to commit an armed robbery.

“I can remember going through the door into the shop and there was a lovely lady behind the counter,” he explains. “I think she understood straight away that something was going to go wrong and to see the fear in her eyes is something I shall never forget.

“When I look back and think about how I must have come across to her - to put that fear into her - I’m completely ashamed. I really, really regret that I could have been someone so horrible as to do that to someone else and it’s something I have to live with every day.

“I would love with all my heart to be able to apologise to her. I pray for her every day, though I don’t know where she is or even if she is still alive. I will continue to do that until the day I die. I pray for her family as well because I know what I did will have also affected them.”

We are talking in the main body of Holy Trinity church off Wigton Road in Carlisle, after what has been three hours of interviews and filming with the county’s media.

Matt’s is a faith story which has attracted plenty of attention since announcement of his appointment as Priest in Charge of Carlisle Holy Trinity and St Barnabas Team Ministry and Priest in Charge of St Luke’s. And that’s not surprising; his is a heck of a story to tell.

Born into a troubled family in Yorkshire, his parents split when he was young and he chose to live with an abusive father, who has since died.

“I was surrounded by violence and crime because of my dad so I inevitably went down that way myself,” Matt says. “I learned to answer all my problems with my fists. Things just got worse and worse.

“I was well and truly off the rails and living with my dad meant I could get my hands on drink and drugs. The crime I was involved with got worse too; shoplifting became burglary and then robbery.”

In a bid to end the spiral of decline Matt joined the army and was stationed in Germany. That ended badly; he regularly went AWOL and was eventually discharged.

Back in the UK he began to re-offend; his crimes became increasingly more serious leading to the armed robbery. He was eventually arrested after being involved in a car crash in Carlisle, while visiting a friend –just a few miles from where he is now ministering.

Matt adds: “At that time I blamed God for everything that had gone wrong in my life. As far as I was concerned it was his fault. I even tried to commit suicide.

“But before I was arrested I said to him ‘I don’t care if I live or die now but if you get me caught alive, then I will follow you.’ When I was alone in the police cell after my arrest I felt God’s presence and I said ‘Yes’ to him. Immediately so much of the anger and hurt I had bottled up was taken from me; it was amazing.”

In 1995 he was jailed for 11 years. After serving nearly four years - during which time he drew alongside a prison chaplain and came to faith - he was released.

Matt says: “While I was in prison God told me three things: I would marry, I would be involved in prison ministry and thirdly I would be a vicar. I just felt as though this was just a big joke; none of this could happen to me in a month of Sundays!”

But within weeks of release he’d met his wife, Haley. The couple married and have a 19-year-old son, Seth. In 2000 Matt started a three-year degree course at Bible college despite struggling with literacy.

Later he and Haley set up the Beyond Bars charity to support serving and former prisoners in community training programmes and rehabilitation.

And then he was accepted for ordination. A two-year theological course followed during which time Matt woke one morning to find he had no feelings in his legs. Doctors diagnosed a prolapsed disc, trapped sciatic nerve, crumbling spine and pelvis. It means he is now a full-time wheelchair user.

“I was someone who was very fit and active so it was hard but I have never questioned God about what happened,” Matt continues. “I’ve learned more about God and my relationship with him by being in a wheelchair. I know he is a loving God who has done some amazing things in our lives as a family. We have seen miracles happen.”

Now the family are in north Cumbria, called to serve within the county’s ecumenical God for All vision that by 2020 everybody in Cumbria of all ages and backgrounds will have an opportunity to discover more of God and God’s purpose in their lives.

Matt adds: “We love what is happening in Cumbria through God for All. There is a sense of mission, community and the need to reach out to people. We give thanks that we can be a part of that.”