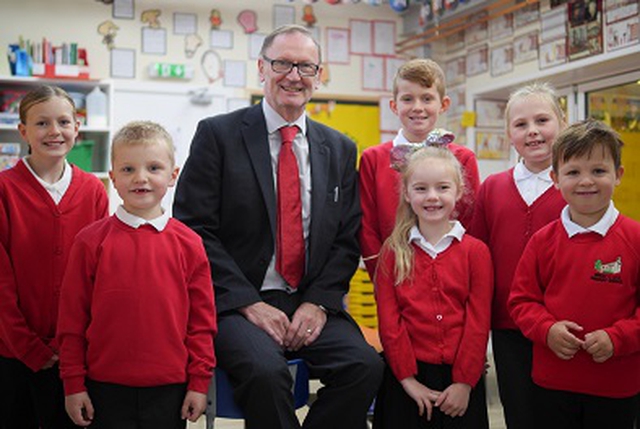 The Director of Education for the Diocese of Carlisle – the Church of England in Cumbria – has announced he is to retire at the end of the year.

Michael Mill will officially step down at the end of December after eight and a half years in the post and more than 40 years working in the education sector.

Michael said: “It has been an enormous privilege to serve the church school communities in Cumbria. I have tremendous admiration for staff in our schools , particularly our small schools, for their commitment and professionalism in tackling the many challenges that schools face.

“I have enjoyed seeing so many of our schools grow and develop their Christian ethos and embrace our national and local Vision for Education. After 40 years in education I think it is time to reflect on new opportunities and the flexibility that retirement brings.

“I am grateful for the support from our excellent staff team both in the Education team and the Good Shepherd Trust and the Board of Education.”

Michael began his career teaching RE in secondary schools in High Wycombe, Buckinghamshire, and Chelmsford, Essex. He later worked for 18 years as an education officer covering Buckinghamshire and Oxfordshire before spending three years in consultancy working on the government investment programme Building Schools for the Future.

Since his appointment with the Diocese, Michael has led the launch and development of The Good Shepherd Multi Academy Trust, which launched in April 2014 and has seven academy members. He also acted as Chief Executive Officer of the MAT for more than four years, prior to the appointment of Cumbrian headteacher Claire Render to the position.

Michael has also overseen the development and revision of the Board of Education’s Vision and Strategy which draws alongside the Church of England’s national policy.

As a member of the National Executive for the Association of Diocesan Directors, Michael has helped shape national educational policy and direction. He is also a member of Cumbria County Council’s Children and Young People’s Scrutiny committee and was a founder member of the Cumbrian Alliance of System Leaders which has develops and strengthens partnership working.

The Rev Andrew Towner, Chair of the Carlisle Diocesan Board of Education (DBE), said: “Mike has been an exemplary Diocesan Director of Education. Along with the Board and team he has ensured that our Diocese has been at the forefront of many national strategies - not least in terms of Peer Support Network and the Church of England Foundation for Educational Leadership.

“Not only has he worked hard across Cumbria, but also at a regional and national level. His vision and energy, passion and hard work have been an example to me and very many others. His retirement is well-earned and much of what he has worked so hard to put in place will continue to impact the children and young people of our county for many years to come.”

The Diocese has begun a recruitment drive in order to appoint a new Director of Education, with a closing date for applications of 19 November, 2019.

The Bishop of Carlisle, the Rt Rev James Newcome, said: “We all are grateful to Mike for his steady leadership and outstanding commitment to the welfare of all our schools and their staff, pupils, parents and governors. We will miss him greatly.”

Michael is married to Claire, who works for Cumbria County Council. The couple live on the outskirts of Carlisle and have two grown up daughters. They plan to move back to High Wycombe.