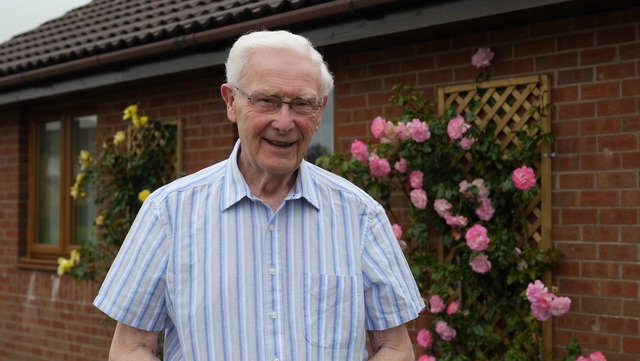 The Archbishop of Canterbury has honoured a Cumbrian church Reader for his 62 years’ service to local parishes.

Melvyn Redgers receives the Canterbury Cross for Services to the Church of England, for outstanding continuous service in the vocation of Lay Reader since 1958.

He joins Songs of Praise presenter Pam Rhodes in being honoured in this year’s Lambeth Awards, the fifth year of the awards.

But Melvyn, 86, nearly missed the email confirming his award after it went into a computer ‘spam’ folder, making him think initially that it may have been a hoax.

He revealed: “I rarely check my spam folder so had not seen the original one from the Archbishop’s chaplain confirming I was to receive the award. I then received another email and realized that this was real.

“The first thing I thought was ‘Why me?’. I feel very humbled to have received this award. I’m really glad that it recognises the ministry of Readers in this diocese and indeed across the whole country.”

Readers, also known as Licensed Lay Ministers, are lay people, called by God, trained and licensed by the Church to preach, teach, lead worship and assist in pastoral, evangelistic and liturgical work. There are around 150 Readers in the Diocese of Carlisle, working with clergy and churchgoers in communities across Cumbria.

Melvyn’s ministry has particularly focused on the Esk parishes of Arthuret, Kirkandrews and Nicholforest in the Brampton Deanery, though he has also preached across the county.

He cites a former Rector of Arthuret, the Rev Roger Frith, as being the person who encouraged him to become a Reader, aged just 24. Together they were involved in Christian outreach in the area, working with children and young people.

Melvyn added: “At that time there was not a lot of money around and people were not able to get away on holidays. But we were able to take the children to the St John’s in the Vale youth centre and take them out onto the fells. At one time at Arthuret we had 24 Sunday school teachers and 240 children involved with church.

“In past years as a Reader we were always particularly in high demand during summer holidays and in times on interregnum. I have always been encouraged in my ministry as a Reader which has helped enormously.”

Melvyn moved to Carlisle in the mid-1940s from South Wales and was brought up in a Christian family, being confirmed at St John’s Upperby.

His family later moved to Longtown, and he attended St Michael’s Arthuret, which remains his home church.

Melvyn, who lives in Gretna with his wife Anne, juggled work commitments in quality assurance at the former RAF Carlisle with his role as a Reader. He also served as a magistrate for more than 40 years and was involved in local government.

He remains in active ministry today, having taken two funeral services since COVID restrictions were lifted on places of worship. He is on the rota to preach in coming weeks after the Government confirmed churches could reopen for public worship, with all the relevant public hygiene and social distancing guidelines in place.

The COVID pandemic means there will not be an official awards ceremony at Lambeth Palace this year.

Melyvn added: “It’s a shame that we shan’t be able to go, it’s something both my wife and I would have enjoyed. I presume the award will be sent by post.

“I plan to be at Arthuret church on Sunday, sat at the back with my wife as I’m not called to preach this weekend.”

The Bishop of Carlisle, the Rt Rev James Newcome, said: “It is wonderful that Melvyn’s ministry as a Reader should be marked in this way. I give thanks for all the years he has served God in this county, faithfully bringing the Gospel message to so many people.

“This Lambeth Award is also a great recognition of the ministry of all of our lay Readers who do so much, each day, to grow God’s Kingdom here in Cumbria.