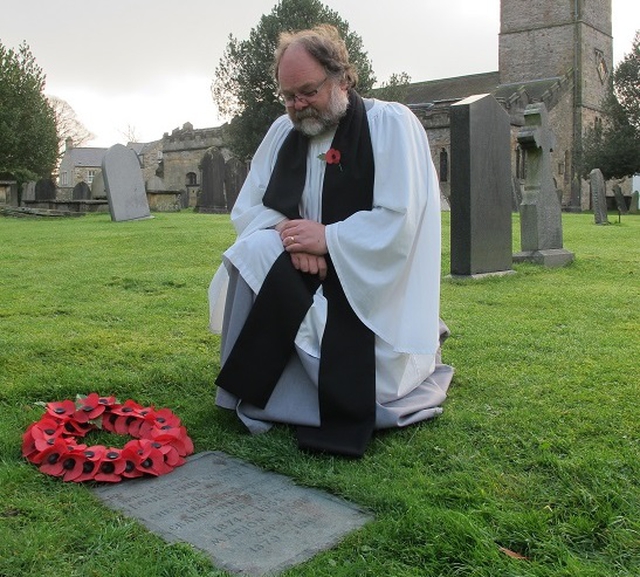 A special Cumbrian service will take place on Armistice Day at the grave of the man who selected the body of the Unknown Warrior.

A hundred years ago, Brigadier General Louis John Wyatt – the General Officer in charge of troops in France and Flanders – was asked to choose the body of a serviceman to be buried in the Westminster Abbey tomb.

The Brigadier General eventually retired to Kirkby Lonsdale and is himself buried in St Mary’s churchyard where at 2.30pm on Wednesday 11 November, a small group of people will gather to pay their respects.

Earlier in the day, a special service will be broadcast live on BBC One from Westminster Abbey, marking the centenary of the burial of the Unknown Warrior.

The Rev Richard Snow, Team Rector of Kirkby Lonsdale Team Ministry and who will lead the Cumbrian service, said: “Obviously the new COVID restrictions and the second lockdown limit the number of people who are able to attend this service. There shall only be six of us there but it is important that we are there to do this.

“I have managed to find the original order of service from a hundred years ago and have been able to modify it accordingly. Obviously there will be no singing, and where there would have been hymns there will now be prayers.

“It’s great that we’ve been able to find the original service. I went online on the Abbey’s website and eventually found it in a PDF document. Praise God for the internet!”

The national lockdown restrictions mean only 6 people will attend the service, including representatives from the town council and SSAFA, the Armed Forces charity. Local man Bill Packham – who will turn 100 years old the following day – will be invited to lay a wreath at the Brigadier General’s grave.

And Tess Pike, a Blue Badge tourist guide who lives in Kirkby Lonsdale and who has been central to the research on the history of the Brigadier General, will also pay tribute.

Tess said: “I’ve been aware of the Brigadier General for more than 25 years and when we first went into lockdown I decided to use the time to bring his story to people’s attention. I think it’s really important that we’re able to do this.

“I’ve also been able to put Westminster Abbey in touch with the Brigadier General’s granddaughter who will now attend the service in London.”

Tess will also host a special fundraising virtual Remembrance Tour of Kirkby Lonsdale on Thursday 12 November at 7.30pm on Zoom. Proceeds will go to SSAFA and the Royal British Legion. To book a place click here.

There are also plans to put up a sign marking the Brigadier General’s resting place and his links to the Unknown Warrior.

Meanwhile the St Mary’s graveside service will also be livestreamed to SSAFA Cumbria’s Facebook page, meaning people will be able to watch.

Rachel Mitchell, SSAFA Cumbria’s Branch Co-ordinator, said: “The story of the Unknown Warrior resonates with all those serving and retired members of the armed services and beyond.

“So to be able to mark the 100th anniversary of his burial will be very poignant. We’re also very grateful to Tess for raising the story of the Brigadier General to enable those commemorations to be brought to Cumbria.”