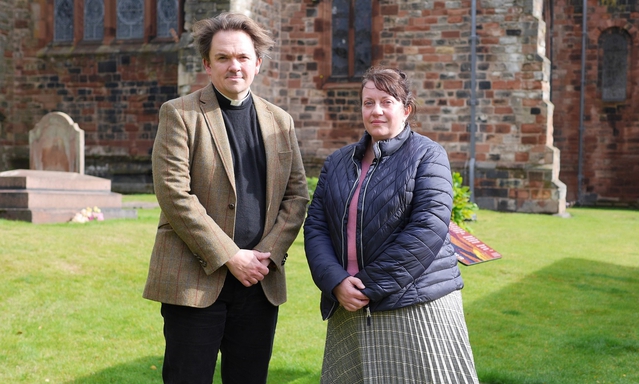 Carlisle Cathedral is to run a Safeguarding Season over coming weeks, to further lament, listen and learn from the survivors of abuse.

The Season will begin on Sunday 10 October –nationally designated as Safeguarding Sunday – and will run through to Wednesday 3 November, All Survivors’ Day.

A specially-formed working party has drawn up a series of events and services through which there will be opportunity to reflect on the suffering of survivors and to reach out further to those affected.

The Dean of Carlisle, the Very Rev Mark Boyling, said: “The Church has much to do to address the wrongs of the past and to actively listen to and support people who were so badly let down by those they should have been able to trust.

“That is why central to our forthcoming Safeguarding Season are three themes: lamenting, listening and learning. Our prayer is that through the various services, prayer stations and installations that we have planned at the Cathedral, survivors will understand the deep sadness which is felt for past actions, coupled with an outpouring of love for those who were so badly affected by their experiences.”

The season will begin with a Safeguarding Sunday service on 10 October which will include the reading out of a safeguarding pledge.

Weekly Eucharist services will also focus on the themes of truth and justice and there shall be a dedicated place of prayer in a side chapel with opportunity to light candles and to tie coloured ribbons to a prayer tree.

On Monday 1 November a Loudfence installation will also be launched in the cathedral grounds, at which people will be able to tie ribbons to railings to ensure survivor voices are heard.

Antonia Sobocki, who organized a similar event at St Peter’s, Kirkbampton, in 2020, and who is a member of the Safeguarding Season working party, said: “Loudfence is a visible display of support and solidarity with those affected by abuse. The ribbons tied to this fence represent the voices of those who wish to speak out in support and defence of those affected by abuse.

“We want all survivors and victims of abuse to know thatwe believe you, we will hear and support you and we will do all we can to prevent this happening again. People will be invited to join by tying a ribbon, pausing to reflect, offering a prayer and making a resolution.”

The Loudfence installation will run for 20 yards on the south side of the Cathedral. People will be invited to tie ribbons to a newly installed fence to amplify the voice of survivors.

Meanwhile arrangements are also being put in place to ensure pastoral support is offered up to anyone who has been affected by abuse and who makes an approach for further help.

The Ven Lee Townend, Archdeacon of Carlisle and lead archdeacon for safeguarding, said: “We very much welcome the opportunity to engage in this Safeguarding Season and to partner with the Cathedral and survivor groups. So much has gone before which has shamed the Church, so this is an important way in which we can all draw together with the common aim of listening to, learning from and supporting survivors of abuse.

“As a Diocese we have also been actively promoting Safeguarding Sunday to churches across the county and our hope and prayer is that as many congregations as possible are able to engage with the resources on offer.”

Anyone affected by issues raised above is encouraged to contact Safe Spaces: an independent service supporting survivors of church-related abuse.

This independent service is run by the charity Victim Support and funded by the Church of England together with the Catholic Church in England and Wales and the Church in Wales. It is free to access via telephone, email or web-chat.