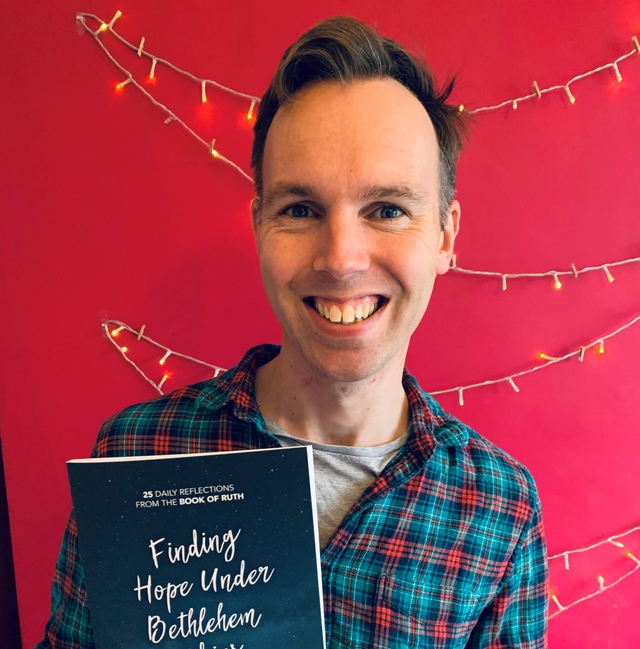 A Cumbrian vicar’s first book – which people are encouraged to read in the run up to Christmas – is being promoted across the UK and America.

Originally, he self-published the book, with 500 copies being printed to help raise funds for local ministry. But now it has been picked up by Christian publisher, 10ofthose, who have chosen to promote it internationally. The book includes 25 daily reflections based around the Old Testament book of Ruth.

Robin, who has lived in Barrow for six years with his wife, Zoe, with whom he has five young children, said: “I originally came up with the idea to preach on Ruth as it’s a book which is so rich in Advent themes. It’s a story which leads to the birth of a baby who will be an ancestor to Jesus.

“I really feel it resonates with the world in which we’re living at the moment: there’s sadness, tears and death but also hope which is found in even the darkest of places.

“I know that people who had read the book locally had found it helpful so when I was then contacted by 10ofthose who said they were keen to publish it that was equally affirming.”

Robin first had the idea to prepare the daily devotions back in December 2019. Originally, he emailed these out to church members. The following year he challenged himself to pen a book which has now been picked up by the publisher.

Readers are encouraged to take five or ten minutes each day during Advent – a season of expectation and preparation, as the Church prepares to celebrate Christ’s birth - to read verses from Ruth, followed by a reflection and final question or prayer suggestion.

Robin has also crafted a special Spotify playlist including fresh and contemporary Advent songs and music which readers are encouraged to listen to, to complement the daily devotions.

The 36-year-old added: “I have always loved writing and trying to communicate. I have a conviction to help people see and understand the richness of the Scriptures for themselves. The Spotify playlist was an added extra, really, but we’ve had lots of positive feedback from people about that as people have felt they’ve also been sharing the music together.

Robin is also offering up a four-week preaching template to complement his book and is encouraging churches to consider reading the daily devotions as Christian communities. The book can be bought for £1 a copy through multi-buy online discounts.

It has also received several endorsements from Christian leaders, including one from the former Bishop of Penrith, the Rt Rev Dr Emma Ineson.

Robin said: “Ultimately I’d like people to see that the message of the book of Ruth is one which is rooted in our everyday life and it’s one for them. Central to it all is the good news of the kindness of God.”