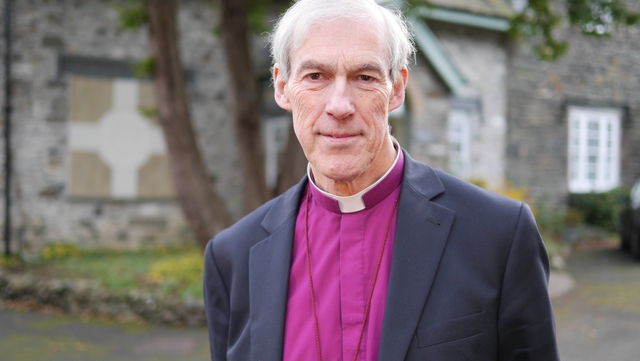 The Bishop of Carlisle has filmed a special message of thanksgiving for Her Majesty The Queen as she marks the 70th anniversary of her accession to the throne, today (Sunday 6 February).

In his message, filmed at Bishop’s House in Keswick, the Rt Rev James Newcome draws on the Queen’s strong spirituality and faith and the tremendous service she has offered during her reign.

Bishop James says: “This year we celebrate the 70th year of her Accession to the Throne. She has served longer than any other Monarch in this country, and the steadfastness she has found in God’s love has been abundantly evident in her throughout her extraordinary reign.”

Since 2014 Bishop James, in his role as Clerk of the Closet, has been responsible for advising the Private Secretary to the Queen on the names of candidates for the role of Royal Chaplain to the Queen. He has responsibility for presenting new diocesan Bishops to the Sovereign when they pay homage and he also preaches annually in the Chapel Royal or at the Queen's Chapel in St James's Palace and examines any theological books to be presented to the Sovereign.

In his message he adds: “We are incredibly fortunate to have Elizabeth II as our Queen, Head of State, and Supreme Governor of The Church of England - and many well-deserved tributes will be paid to her as part of her Platinum Jubilee.”

Accession Day (Sunday 6 February) sees the Queen become the first British Monarch to celebrate a Platinum Jubilee, marking 70 years of service to the people of the United Kingdom, the Realms and the Commonwealth.

Meanwhile links to newly-published church resources including liturgical material: collects, forms of prayer for Accession Day and suggested readings for Accession Day services have been shared across the Diocese.

The filmed message can be viewed on the Diocese of Carlisle’s YouTube Channel and a full transcript of Bishop James’s message is available below:

“You may recall that in 2016 we distributed 2,000 free copies of a little book called ‘The Servant Queen and the King she serves’ around Cumbria. It was provided by the Bible Society, HOPE, and the London Institute for Contemporary Christianity to mark Her Majesty’s 90th Birthday, and – unusually – Queen Elizabeth herself wrote a foreword to it. She spoke then of the extent and pace of change that has taken place during her lifetime – and of tragedies during that time as well as triumphs.‘ Our world’ she wrote, ‘has enjoyed great advances in science and technology, but it has also endured war, conflict and terrible suffering on an unprecedented scale.’ She went on to remark that in her first Christmas Broadcast in 1952 she asked the people of the Commonwealth and Empire to pray for her as she prepared to dedicate herself to their service at her Coronation. ‘I have been – and remain –' she said, ‘very grateful to you for your prayers and to God for his steadfast love.I have indeed seen his faithfulness’.

This year we celebrate the 70th year of her Accession to the Throne. She has served longer than any other Monarch in this country, and the steadfastness she has found in God’s love has been abundantly evident in her throughout her extraordinary reign. Those who work closely with her are quick to point out what a deeply spiritual and faithful person she is, and, commenting on that little book, one observed that ‘Her Majesty’s humility in all that she does sings out from the pages’.

Humility – which is one of the hallmarks of great leadership; and, also, humour, which is always there just beneath the surface, and which is an indication of the deep inner security which has sustained her through many dark times in a long life. We are incredibly fortunate to have Elizabeth II as our Queen, Head of State, and Supreme Governor of The Church of England - and many well-deserved tributes will be paid to her as part of her Platinum Jubilee.

Her experience, patience, dedication, and deep commitment to often sacrificial service remain a wonderful example to us all. So – long may she continue to reign over us: knowing – as she does – that in those well-known words quoted by her father King George VI in 1939, whatever the darkness, putting your hand into the hand of God ‘shall be to you better than light, and safer than a known way’.”