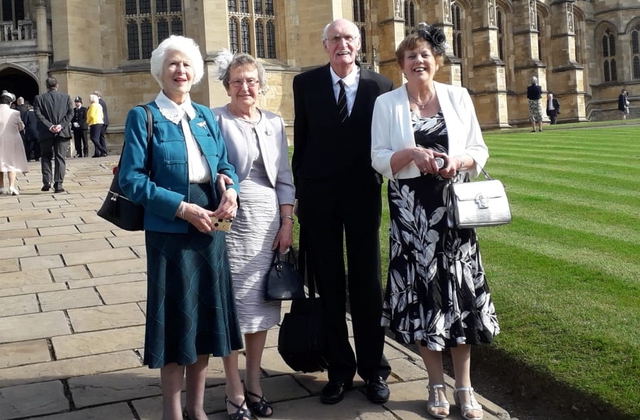 Two people from the Diocese have received Maundy money in recognition of many years’ Christian service to their local church and communities.

Clifford Simpson and Doreen Hocking joined 96 men and women - equal to the age of Her Majesty The Queen – who were presented with the money at St George’s Chapel at Windsor Castle on Maundy Thursday.

In a first, Prince Charles handed out the Maundy money on behalf of The Queen. In 2020 and 2021, Covid restrictions meant the money could not be handed out in person.

Clifford, aged 79, from Kirkby Stephen was accompanied by his wife Nan. He has been associated with the Parish Church of Kirkby Stephen for over seventy years, having served under nine vicars. He originally attended Sunday School, then served as a choir boy and bellringer and sat on the Parochial Church Council for more than 40 years, including service as a churchwarden. For the past 25 years he has actively overseen the upkeep of the church building and grounds and supported local sports clubs – playing cricket, hockey and badminton. He also previously helped put up the town’s Christmas lights.

Clifford said: “I was taken aback when the letter arrived. It was totally out of the blue. The day was brilliant. We travelled down on the Wednesday and all had a meal together that night.

“It was lovely to meet Prince Charles. He shook all our hands and said, ‘On behalf of The Queen, thank you very much’.”

Doreen, aged 86, has given life-long commitment to St Leonard’s Church in Cleator which she first attended as a toddler. She previously served as a PCC member, and continues as Mothers’ Union Leader, Gift Aid co-ordinator and welcomer. During the Covid pandemic she kept up a live link with all her MU members to keep spirits up and also led midweek services for 16 years. She was accompanied to the Maundy service by her friend, Joan Johnston.

Doreen said: “There was nobody more shocked than me when the invitation was posted through the letter box but after the initial shock I was delighted and saw this as a wonderful opportunity.

“It was a fantastic day and everything went so smoothly. The chapel was full and the service was glorious with wonderful processions and organ music.”

The tradition of the sovereign giving money dates from the thirteenth century. Each recipient is given two leather purses – one containing coinage worth £5.50 in lieu of food and clothing and the second contains silver Maundy coins, the same number of pence as the sovereign’s age.

Maundy Thursday commemorates the day of the Last Supper of Jesus Christ with the Apostles, with the word ‘Maundy’ coming from Christ’s command or ‘mandatum’ to love one another.

The Bishop of Carlisle, the Rt Rev James Newcome, said: “It is wonderful to know that Doreen and Clifford had such a memorable day.

“It is an honour to receive the Maundy money but it is one which they both richly deserved for the selfless dedication they have shown through decades of service to their respective churches and communities. We are blessed to have people such as this in our Diocese.”