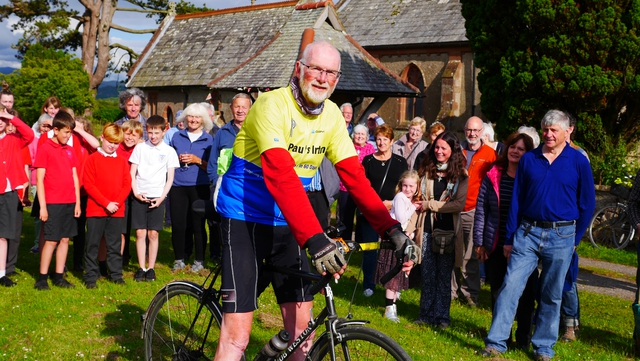 A west Cumbrian church organist has completed a marathon 3,800-mile cycle ride raising thousands of pounds towards the restoration of the historic instrument he plays.

Last night (Monday 4 July) John Corran pedalled back to his home church of St Paul’s Irton, near Gosforth, having criss-crossed England, cycling to every St Paul’s church in the country.

In 2019 retired headteacher John, 69, came up with the idea to visit the churches to raise funds for the restoration of the Grade II listed, 147-year-old organ which he plays at Irton.

He said: “In 2018 we had a thorough survey completed of the organ to establish what work needed to be done. Those in the know in the organ world say it’s a fantastic instrument and one which is very much worth keeping.

“So, as someone who enjoys playing it, I felt I should do something to help fundraise for the restoration. We want this organ to be around for years to come both as an accompaniment to services and also to be used for teaching and recitals.

“I came up with the idea of cycling to every St Paul’s church and then one person said they’d sponsor me and that was the start!”

His brother-in-law – who is ordained – helped to draw up details of every Anglican St Paul’s church in England, with John taking a picture at each one during his tour to prove he had visited.

His epic journey began in May and saw him travel the length and breadth of England, starting in Chacewater, near Truro, heading over to the Isle of Wight and making it as far north as Branxton on the Scottish border. His journey took 60 days and saw him visit 253 churches. He was able to call on friends, family and churches across the country who helped provide food and accommodation.

John explained: “I’ve been cycling 50 or 60 miles most days, though some were longer, sometimes 90 miles. I love getting out on the bike; you see so much more than you would in a car.

“I’m surprised at how well I feel, I’m probably fitter than I’ve ever been. Each day I’d get on the bike wondering if I’d be able to keep going, especially when it was hilly, but I did. Everyone I’ve met along the way has been so supportive and welcoming. I can’t thank them enough.”

His youngest son Will was able to join John on a tour of St Paul’s churches in east London (where he lives). John was also able to call in at St Paul’s Cathedral.

His eldest son Sam – a Lake District Park Ranger in Wasdale who was on hand to help cheer his dad home - said: “It’s crazy to think of what he’s done but good on him; it has been a massive effort and all towards something he loves doing, playing the organ. I’m happy to have him back home after all he’s achieved.”

John first began playing the organ when he was part of a choir in his hometown of Birkenhead, later playing at regular services, funerals and weddings. There was then a gap of 30 years before he returned to playing at Irton.

Irton churchwarden Janet Jennings said: “We are all absolutely amazed at what John has done. The restoration of our church organ is so important to him and we can’t thank him enough for all he’s done.”

John is looking to raise a total of £80,000 towards the organ restoration fund which would mean the organ could be dismantled, cleaned and some missing pipes replaced.

His cycle ride has raised more than £3,000 and though his journey is now complete, John says there is still time for people to donate via his JustGiving page.

He added: “I know of a number of young people who have already expressed an interest in learning to play the organ at St Paul’s Irton. It would be wonderful to think that the instrument would be around for another 147 years for future generations.

“And as for the next fundraising challenge, well someone has told me they know of at least five St Paul’s churches in Wales!”

For further information please contact Dave Roberts, Head of Communications, on 07469 153658 or at communications@carlislediocese.org.uk.