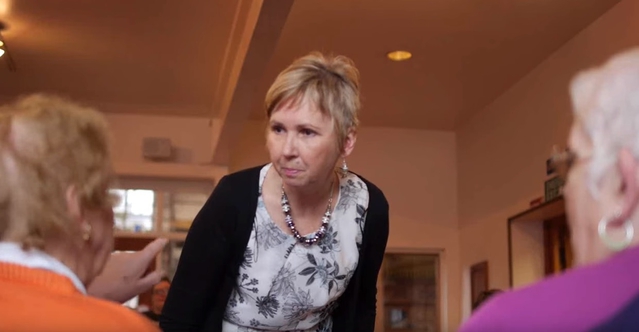 A south Cumbrian community pastor has been named a BBC ‘Christmas Star’ for services to her parish.

Gill Grisedale runs a Clothes Bank at St Mark’s Barrow which has had 35,000 visits since it opened in September 2016.

She also organises special gift days for the community. A recent ‘Christmas Give Away’ saw 135 people given special vouchers to buy gifts which had been donated by church members and the wider community.

And last night viewers of BBC North West Tonight – which covers the southern part of Cumbria – watched as she was presented with a special Christmas Star award in recognition of her community work.

Gill explained: “I thought the crew had come to film a feature about the Clothes Bank so I’d been giving him a tour. It was a complete shock to me when the reporter explained why they were here.

“He turned to me and said ‘Actually Gill, we’ve not been telling you the truth’ then he told me about the award. This was done in a hall at church which was full of people who were enjoying their lunch as part of our Munching Mark’s. Everyone started to clap and then sang ‘For She’s a Jolly Good Fellow’.

“I said that I thought there were more deserving recipients and that I was simply a part of a big team but the reporter was adamant that I should have the award.

“It was a lovely thing to happen and I’m so grateful to have been nominated but I’m just doing what any Christian should do in this situation; reaching out to help others.”

BBC reporter Ian Haslam presented Gill with the award on Monday, and the report was broadcast last night. It is one of 15 Christmas Stars to be handed out on the programme over three weeks and more than 500 people were nominated for the award.

As community pastor at St Mark’s, Gill works alongside the Rev Tony Ford in what is one of the most deprived parishes in Cumbria. Tony was there when the award was presented.

He said: “Gill is a real gem, a real gift to the church and the work she is involved with is amazing. Before the award was made, the reporter asked us what her reaction would be and I explained that Gill would never expect it because she is such a humble person.

“She was totally stunned and completely gobsmacked because she simply did not see it coming. It was such a lovely moment and one that is so richly deserved for all her amazing work.”

Gill also helps organise a Youth Café which meets every Tuesday at the church, attracting up to 50 young people aged from six to 16. They are served a meal, enjoy activities and there’s a ten minute ‘God Slot’.

She also runs fortnightly Bible, Brew and a Biscuit informal groups as well as LIGHT – Learning In God’s House Together – sessions which are Bible based and include worship and songs.

Gill added: “We have to work really hard to fund this post from year to year and so it’s heartening to hear that it’s valued by those people we’re looking to help and to reach out to.

“This is not just about running a Clothes Bank, it’s about helping those people who need it and leading them to Christ.”