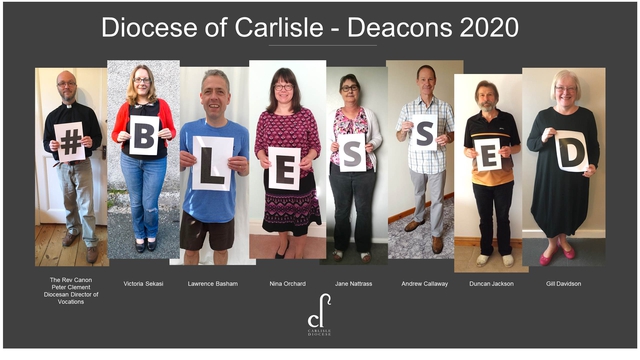 Seven soon-to-be curates are set to start ministry despite the coronavirus pandemic forcing the cancellation of a planned ordination service.

All were due to be ordained Deacon by the Bishop of Carlisle at Carlisle Cathedral tomorrow (Saturday, 27 June) but the coronavirus has meant the service has had to be rearranged. The ordinations are now set to take place at the Cathedral on Saturday 26 September.

Despite the delay, the Bishop of Carlisle has given permission for those who will be stipendiary Deacons to exercise the ‘cure of souls’ within the Diocese. This enables them to be employed by the Diocese from 1 July. Meanwhile non-stipendiaries will continue in the ministries they already have prior to being ordained in September.

The group includes a Finn-born former counsellor, a soon-to-be retired chemistry teacher, a manager of a residential care home, a former greengrocer, a parish centre administrator, a Network Youth Church leader and a waste management consultant.

The seven will serve in mission communities across Cumbria, which are cross-denominational groupings of churches with mission at their centre.

The Rev Canon Peter Clement, Diocesan Director of Vocations, said: “This has been a difficult and challenging time for all those who were due to be ordained and their families. Clearly the pandemic meant that the ordination services had to be put on hold but as places of worship continue to reopen, so we can all look forward to a tremendous celebration later in the year. Despite the difficulties presented by COVID-19, it is wonderful to know that these ordinands can begin their ministry. I would ask that everyone keeps them all in our prayers at this time.”

A Deacon is one of the orders of ministry, to which all clergy in the Church of England are admitted. Some remain Deacons all their lives but most are ordained priest usually a year after being ordained a Deacon.Deacons have a full ministry in the Church of England but unlike priests, cannot preside at the Eucharist, pronounce the absolution or pronounce the Trinitarian blessing. Deacons focus on a servant ministry, particularly to the poor and marginalised.

Meanwhile the COVID-19 pandemic has also forced the cancellation of the ordination of Priests, which were due to be held in their home churches. Again the services have been rearranged for later dates in the year. The Bishop of Carlisle and the Bishop of Penrith will officiate at various services.

Yorkshireman Lawrence, 48, moves to the Diocese of Carlisle from the Wharfedale area of Otley and Ilkley. Having run three successful greengrocers, he chose to give the businesses up when he came to faith in his mid-30s, becoming the Director of Youth, Children’s and Families’ Ministry at All Saints, Ilkley, before training for ordination at the Sheffield campus of St Hild College. Married to Jemma, the couple has four young children: Hope, 9, twins Joy and Judah, 5, and two-year-old Iva. The family has deep connections with Cumbria and they have holidayed in the Lake District for the past three years. Lawrence is also a keen mountain walker and fell runner.

The following verse has had particular resonance for Lawrence during his training for ordination: “Therefore, since we are surrounded by such a great cloud of witnesses, let us throw off everything that hinders and the sin that so easily entangles. And let us run with perseverance the race marked out for us." (Hebrews 12: 1)

Andrew starts his curacy as a long career in teaching comes to an end with retirement. Born in Cambridgeshire he and his family moved around regularly as his father was in the RAF. In his early 20s he met his wife, Carol, and the couple settled in Matlock before then moving to Worksop. They have two grown up children. A job at John Ruskin School in Coniston brought them to Cumbria, with subsequent teaching positions at St Benedict’s School in Whitehaven and Solway Community College in Silloth. He cites an RAF Padre who his family lived next to when he was a boy, as being a big influence in coming to faith. That was further influenced by Carol. He later became a Methodist Local Preacher and trained as an Anglican Reader eight years ago. He has completed two years’ training with Cumbria Christian Learning.

Andrew says that Psalm 46 v10a - He says, "Be still, and know that I am God" has spoken to both him and Carol during his time training for ordination.

Gill has continued to manage a Christian Residential Care Home during COVID-19, whilst also completing her ordination training. She has lived in west Cumbria for most of her life, having also studied for a languages degree in Newcastle. Turning to nursing as a profession, Gill moved away from attending church because she was often working on Sundays. She later became a nurse practitioner in general practice before becoming Practice Manager of a GP Surgery and later manager of the Emmaus House Residential Home on the outskirts of Whitehaven. She came back to church after completing an Alpha Course in 2003 and has been an active member of All Saints Cockermouth, completing two years’ ordination training with Cumbria Christian Learning.

Jeremiah 29:11 has resonated for Gill during training for ordination, underpinning that even though she tried to escape God’s plans, he didn’t give up on her.

Born in Essex and having lived in the east end of London, Duncan moved to west Cumbria in his 20s. As a waste management consultant – with a specialty in radioactive waste – he has previously worked at Sellafield and the West Lakes Research Institute. His work also saw him seconded to BP where he supported development of the oil and petroleum projects in Azerbaijan. Back in Cumbria he has also worked closely with Eden Nuclear and Environment as their Technical Director. He has three grown up children. Duncan trained as an Anglican Reader in 1994, serving his home benefice of Gosforth, Nether Wasdale and Wasdale Head. He now lives in Egremont and considers his home church to be Haile.Already having a degree in Theology, Duncan has completed a one-year fast-track training programme through Cumbria Christian Learning.

James 1:12 holds particular resonance for Duncan: “Blessed is the man who endures trial, for when he has stood the test he will receive the crown of life which God has promised to those who love him.”

Jane has lived for most of her life in Kendal and has been married to her husband, Julian, for 38 years. The couple has three grown up children and five grandchildren. Starting her working life as a nurse, Jane later became a specialist attachment support worker in a school. She then completed a teaching degree and taught for nine years at Long Marton Primary School. Jane - who at one time had moved away from her faith - later became the administrator for St Mary’s Church in Ambleside and is also the administrator for the Parish Centre in Ambleside. The Rev Beverley Lock encouraged her to explore ordination, a journey of five years during which she has studied for two years with Cumbria Christian Learning.

Luke 9: 62 speaks to Jane as she prepares for her new ministry in Cumbria, following God’s plans in new ways as she walks the road ahead.

There will be double the reason to celebrate when Nina turns 50; her birthday is on the same day that she becomes a curate. Born in Finland, Nina moved to the UK over 20 years ago and has lived in London for the majority of that time. Married to Nigel and with three children – Daniel, 18, Ella, 16 and Henri, 13 – the family will swap their home in Shepherd’s Bush for a new start in Carlisle. Nina has previously trained as a counsellor and also was a stay at home mum when her children were smaller before working as a manager for her home church in London - St Simon’s. She came to faith in her early 20s when still living in Finland and after training for ordination at St Mellitus College, she and her family have felt God’s calling to ministry in Cumbria.

Nina points to Psalm 46: 10 'Be still and know that I am God' as a beautiful and powerful reminder to turn to God in the midst of business, change, uncertainty, and find his peace.

Former Furness Network Youth Church leader Vic has juggled training for ordination with becoming a mum for the first time. The 39-year-old, who originally hails from Barnsley, is married to architect and photographer, Martin, with whom she has eight-month-old Annabella. Vic came to faith aged 14, having completed an Alpha Course. She studied for a degree at the University of Leicester, before working at the city’s Holy Trinity church for 12 years as a student worker. She moved to Cumbria to take up the Furness post. A New Wine Women’s Prayer Group provided the clarity she needed to explore ordination, having now completed two years’ training with Cumbria Christian Learning.

Victoria says Joshua 1: 9 has provided particular meaning for her as she has worked towards ordination, reflecting God’s calling her towards leadership.