Renewed commitment made to Cumbrian churches working together 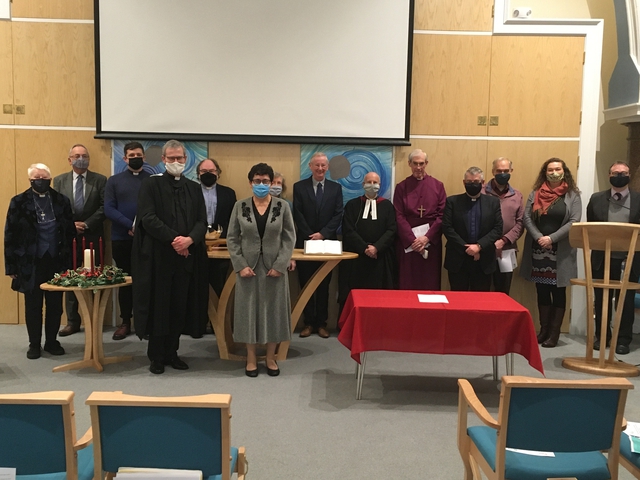 Ten years after Cumbria became England’s first ecumenical county, the Service of Reaffirmation at Keswick Methodist Church saw denominational leaders sign or commit to a Declaration of Covenanted Partnership and a Declaration of Companionship.

Heavy snow and dangerous road conditions in some parts of the county meant that, unfortunately, not all attendees could make it to the service, which came a decade after partner and companion denominations first signed a Declaration of Intent at Ambleside.

Since then, churches have worked together to grow God’s Kingdom in the county and have developed the ecumenical God for All vision and strategy.

Representatives from mission communities (groups of mutually supportive, mission-focused churches), local Churches Together groups and ecumenical projects from across Cumbria, also attended the Service of Reaffirmation.

The Rev Andrew Dodd, President of Churches Together in Cumbria, said: “It was a shame that numbers were limited at the service due to the sudden wintry weather which hit the county.

“But I give thanks for all those who were able to attend and all those I know who would have been praying for us, though the snow and ice meant they were not able to get to Keswick.

“It was an opportunity to give thanks, too, for the continued commitment to our joint working together as churches in Cumbria in the coming years. We heard some wonderful stories as to how that united approach in Christ is truly helping God work his purposes out in our county.

“It is wonderful to know that a new commitment has been made to that joint working and our prayers would be that the coming years will see a sense of renewed growth and sense of mission through God for All.”

Leaders from the four partner denominations – United Reformed, Methodists, Salvation Army and Anglican – and those of companion denominations – the Church of Scotland, Roman Catholic Church, the Religious Society of Friends and the North Western Baptist Association – all committed to signing or affirming the new document. The wintry weather meant that leaders from four denominations were unable to attend but the document is being circulated to gather signatures.

The service included a series of four special reflections which focussed on ecumenical working to support mission in Kirkby Lonsdale, across social responsibility, in and around the Cockermouth area and as part of the Network Youth Church, which supports hundreds of young people across Cumbria in their faith journeys.

The Rev Dr Paul Goodliff, General Secretary of Churches Together in England, also gave an address at the Service of Reaffirmation.

In 2011 leaders from the Methodist, United Reformed and Anglican churches first joined together to sign a Declaration of Intent. They were joined in 2016 by the Salvation Army.

Since then, the partner denominations – along with the companion denominations - have developed the God for All vision and strategy. That is currently being refreshed around four new themes: Speak Boldly, Follow Daily, Care Deeply and Tread Gently.

For more on God for All visit www.godforall.org.uk

For further information contact Dave Roberts, Head of Communications, Diocese of Carlisle on 07469 153658, 01768 807764 or communications@carlislediocese.org.uk.