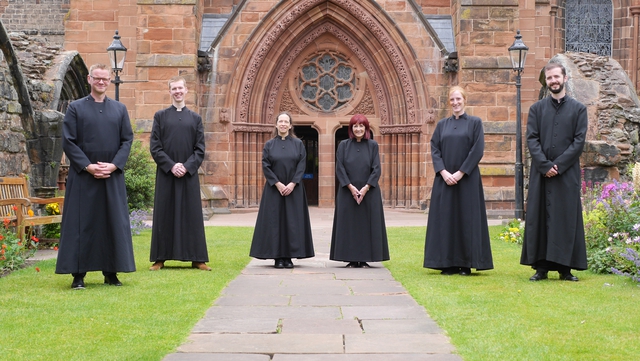 Six new curates are to be welcomed into the Diocese of Carlisle over the coming weeks as part of the Petertide ordinations.

Five will be ordained Deacon by the Bishop of Carlisle, the Rt Rev James Newcome at a special service to be held at Carlisle Cathedral on Saturday 25 June at 2.30pm.

The service will also be livestreamed on both the Diocese of Carlisle and Carlisle Cathedral Facebook pages.

The group includes a former NHS communication and administration worker, a product designer, a GP practice lead nurse, a former music teacher, a former South Lakeland District Council employee and a YMCA hostel chaplain. One will be a self-supporting minister (unsalaried) whilst the other five will serve as stipendiary (salaried) curates.

Meanwhile a sixth curate, Matthew Richards, will be ordained Deacon in a service at St Kentigern's Aspatria on Thursday 14 July at 6.30pm. He will serve Solway Plain Mission Community.

There are 35 mission communities across Cumbria which are cross-denominational and mutually supportive groupings of churches with mission at their centre.

Three of the group have completed their training with Emmanuel Theological College which is a partnership created by the six north west dioceses.

The Rev Canon Peter Clement, Diocesan Director of Vocations, said: “This is always such an exciting time as we welcome each of the ordinands to their new ministry and give thanks for all that God has done to guide them to this point. I know that each one will be supported by much prayer as they step out in their new ministry.”

A Deacon is one of the orders of ministry, to which all clergy in the Church of England are admitted. Some remain Deacons all their lives but most are ordained priest usually a year after being ordained a Deacon.Deacons have a full ministry in the Church of England but unlike priests, cannot preside at the Eucharist, pronounce the absolution or pronounce the Trinitarian blessing. Deacons focus on a servant ministry, particularly to the poor and marginalized and more generally in the wider community.

Meanwhile a series of special services for the ordination of Priests (those Deaconed last year), will be held in their respective home churches. The Bishop of Carlisle will officiate at each service.

Bishop James said: “I give thanks that all of our ordinands have discerned God’s calling and will begin to live out their ordained ministry in Cumbria. We are truly blessed that they have committed themselves to mission and ministry across the county so that together we can continue to grow God’s kingdom through our refreshed God for All vision and strategy.

“May I urge people to commit all those to be Deaconed and Priested to their prayers over the coming days, weeks and months. Together we pray that they and their loved ones may flourish in their ministry, guided by a loving and ever-present God.” 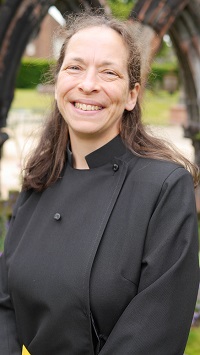 Lindsay, 55, was born and raised in west Kent in a Christian family. She says she has “been a Christian for as long as I can remember”. At the age of 18 she moved to Leeds to study for a degree in Agricultural Animal Science, and where she also attended a local Baptist church. After graduation she moved to the Lake District to work at the YMCA Lakeside national centre teaching outdoor pursuits. Lindsay later worked in the laboratory at Farley Health Products in Kendal before moving back to Kent and completing an NVQ in Business Administration. Lindsay then worked in publishing for 10 years before returning to Kendal where she worked for South Lakeland District Council for 13 years and where she joined St Thomas Kendal and began to lead services and preach. She later attended a vocations evening to explore training and then discussed full-time ministry with her vicar. She chose to leave SLDC and then trained at Cranmer Hall theological college in Durham for two years. Lindsay will be based in Langwathby

The story of the five loaves and two fishes is hugely important for Lindsay, underlining God’s bounty and provision. She has had it embroidered on to her stole. 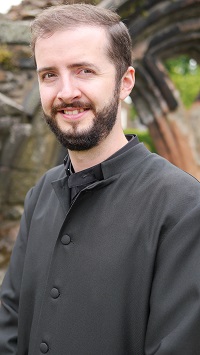 Simon, 29, grew up in Southport in Merseyside before attending King’s College London to study English and Linguistics. He is a lifelong supporter of Tranmere Rovers FC (where his brother is now Head of Finance) and was a keen footballer himself; in his late teens he began coaching people with learning difficulties. Simon grew up in a secular household but came to faith aged 18 after finding a Gideon’s New Testament and Psalms underneath his bed, during a time of personal crisis when his father became seriously ill. He remembers praying for the first time on New Year’s Eve in 2009. On starting at university Simon joined the Christian Union and an evangelical church. After graduation he chose to work in the secular world before considering ministry. He worked for three years in NHS communications and administration in Nottingham before taking up a two-year church apprenticeship back in London. He then became a youth worker at the church and began a discernment process into ordained ministry which led to him training at Wycliffe Hall theological college in Oxford. Simon will be a stipendiary (salaried) curate and will live in Barrow. He will minister from a training hub at St Paul’s Barrow, providing insight right across the Barrow Mission Community.

Simon says 2 Corinthians 12 verse 10 (‘For when I am weak, then I am strong’) holds particular significance for him, underlining those times when he has felt raised up by God. 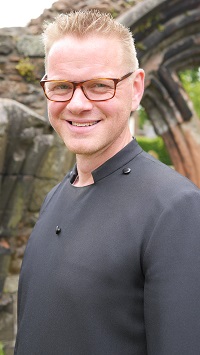 Rob comes to ordination after five years as a full-time youth leader at St Thomas Kendal. He has a passion for songwriting, composing regularly for school assemblies and worship. In 2019, whilst at church, he felt God’s call to ordination and began to explore the possibility before eventually beginning training at St Mellitus theological college and then transferring to Emmanuel Theological College. Rob, 46, is married to Rachel with whom he has three grown up children. He was born in Newcastle upon Tyne before at the age of eight moving with his family to the Bristol area. He attended Methodist church as a child but turned away from church in his early teens. A group of friends at sixth form college – all of whom attended a Baptist church – drew him back to faith. On attending the University of Central Lancashire in Preston to study Product Design, he joined the Christian Union, the following year becoming its President. He met his wife-to-be, Rachel, at the CU, the couple marrying two years later, eventually moving to Gloucestershire. They then moved to the south Lakes in 2000 where Rob worked for English Lakes Hotels and later for Lowe Alpine outdoor equipment manufacturer. He has also worked as an associate in Cumbrian schools for The Naked Truth Project, a Christian charity that raises awareness of the damaging effects of pornography and offers support. He and Rachel will continue to live in Staveley and Rob will serve his curacy at Holy Trinity Kendal.

Rob says that Matthew 11:28-30 has been an anchor verse for him for many years: “Come to me, all you who are weary and burdened, and I will give you rest…” 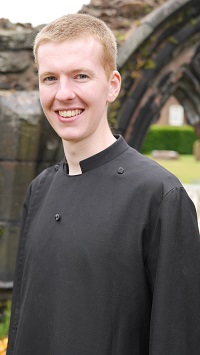 The wedding of his best friend – at which he is best man and Matthew’s mother will officiate – means he can’t attend the June ordination service. With Bishop James’ blessing he will be Deaconed separately at a service in Aspatria. The 25-year-old grew up in a village setting in north Shropshire in a Christian family. After only four months studying for a degree in Civil Engineering at Bristol University, Matthew felt God’s call to leave the course. He instead moved to Stoke on Trent and became an intern at a local church for two years. A key part of the internship saw Matthew work with a YMCA hostel, drawing alongside around a hundred 16 to 25-year-olds who live on a campus. Matthew has been drawn to pioneering ministry and for the last three years has trained with Church Mission Society at Cuddesdon, whilst also continuing to minister in Stoke and provide chaplaincy at the YMCA. Just before Covid hit, Matthew attended a YMCA conference in Germany where he met his future wife, Saskia, who is originally from Switzerland. The couple married last June and will be based in Aspatria during his pioneer curacy.

Proverbs 3:5-6 resonates for Matthew - “Trust in the Lord with all your heart and lean not on your own understanding, in all your ways submit to him, and he will make your paths straight”- as it reminds him constantly of the need to submit to God’s guidance throughout his faith journey. 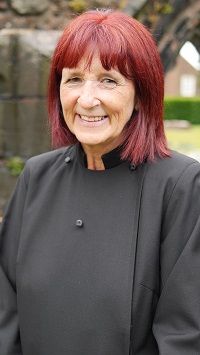 Barbara was born in Howden in Yorkshire and began attending church with her mother aged three, later attending Sunday School. A formative moment in her faith journey came when she attended an evangelical church bus during the summer holidays, aged nine. Barbara, 65, later moved to Hull to train as a nurse but shift work meant that attending church became more difficult. After marrying her GP husband, David, the couple moved to Hampshire and then spent 18 months providing healthcare to the community on Tristan da Cunha in the South Atlantic Ocean. The couple and their two children eventually moved to Leicestershire - which saw her return to church – before eventually relocating to Loweswater where David originates from. Barbara began to explore ordination in 2005, initially attending the Called to Serve course. Some years later during a church service she felt a renewed call to ordination, spoke with a vocations advisor and completed the Worship for Today course. Barbara – who is a lead nurse in a Cockermouth GP practice and oversaw roll-out of the Covid vaccine programme– trained initially with Cumbria Christian Learning and later Emmanuel Theological College. She will serve as a self-supporting (unsalaried) minister.

Hebrews 13:6 gives Barbara confidence as she says she feels the protection of the Lord constantly and so does not feel afraid. 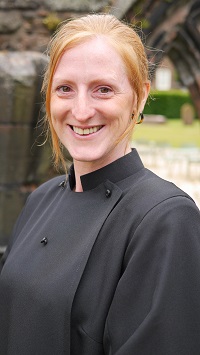 Hannah was born and raised in Kent, attending church from an early age. Music has always played an important part in her worship, joining the church choir at the age of three and singing ever since. She began to grow a personal faith in her mid-teens which blossomed in her mid-20s. From that point Hannah, 42, began to consider ordained ministry but continued in her role as a music teacher, having completed a music degree at university. Following a holiday at Lee Abbey Christian retreat and conference centre, she felt called to join the community there, eventually serving as Director of Music for 18 months. She met her husband, Greg, when he joined the community as an outdoor pursuits instructor. The couple moved to Canterbury when Hannah was offered a post as part of a university chaplaincy team. They and their two children eventually moved to Ulverston where Hannah began to explore ordination, beginning training at St Mellitus and completing her studies at Emmanuel Theological College. Hannah and her family will be based in Arnside during her curacy.

Hannah says that Ephesians 3:17b-19 is particularly significant for her as at the heart of her ministry is to know and, especially, to make known the richness of the love of Christ.